Las Vegas calling… A translation journey with Out of the Wings 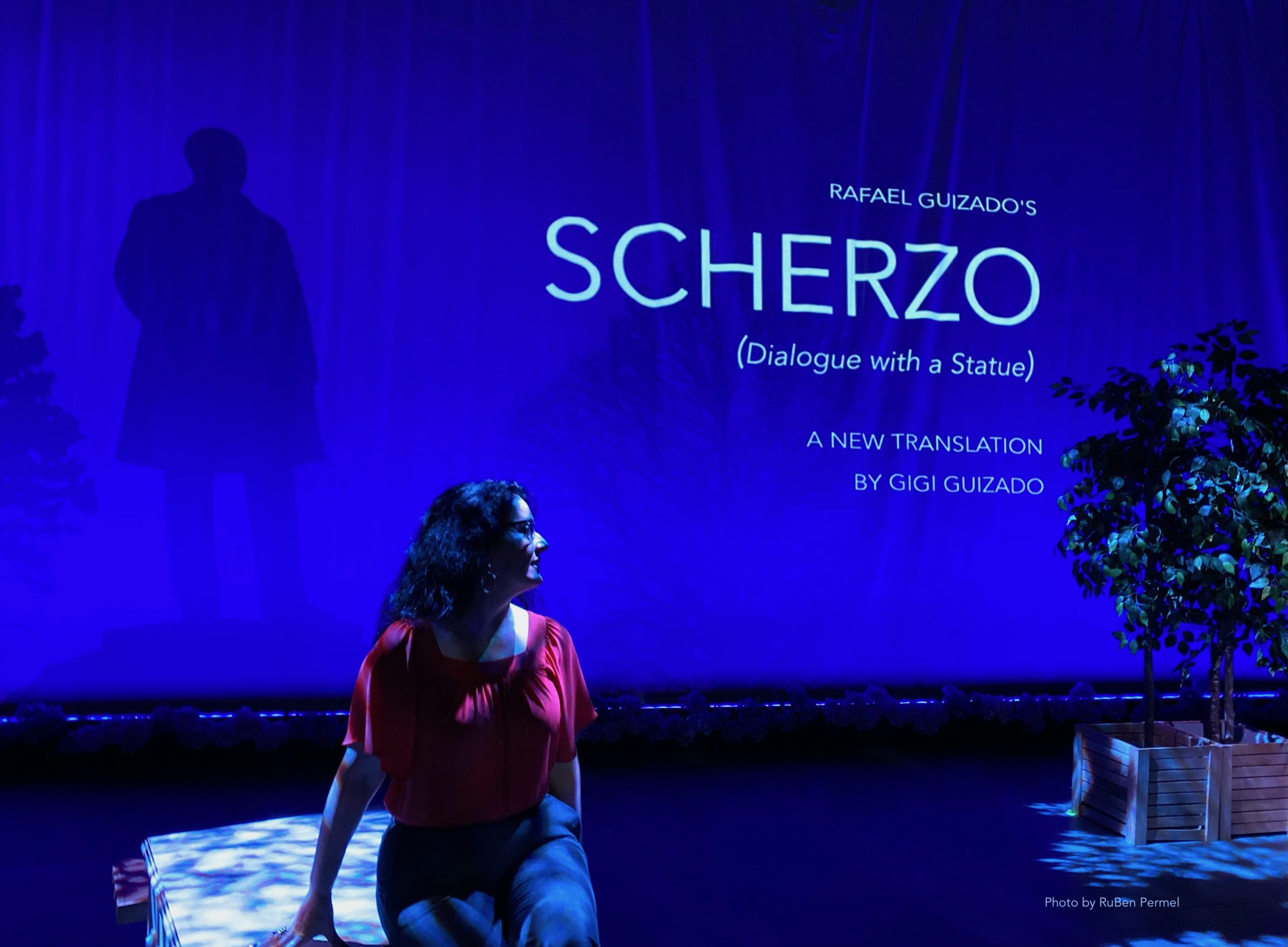 Translator and actor Gigi Guizado is in London for the premiere of her translation of The Therapist by Peruvian dramatist Gabriela Yepes.  But her journey with Out of the Wings began with an altogether more personal connection.  Here, Gigi describes how researching her family history, and the work of her pioneering playwright grandfather, led to her meeting OOTW for the first time, and how her work with the collective eventually led back to a theatre stage in her home city, Las Vegas. 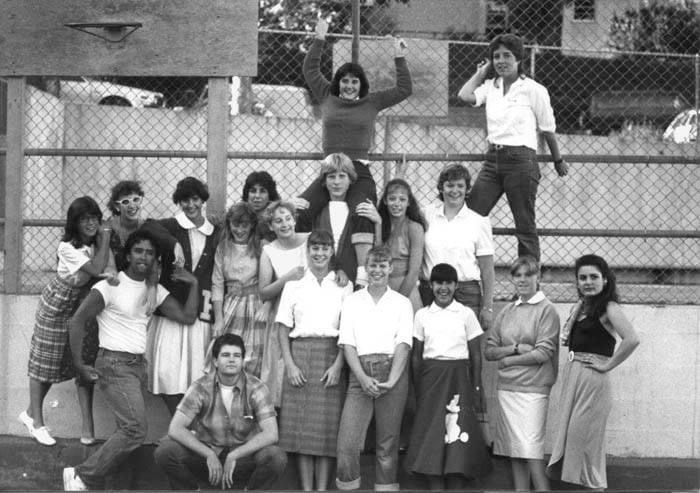 I met the work of Rafael Guizado in Miami, as a precocious, teenaged theatre artist. I was introduced to it by my father, who I was also just getting to know. Sixteen years is a lot of time to make up for, and an entire family tree was a lot of information to fill me in about. We pieced it together as best we could. My father described his father primarily as a diplomat. Later, he added that my late grandfather had been a playwright and involved in radio theater. This struck an eerie chord with me, as I had already experimented with my own radio show at my high school station KSRH, interned at the local radio station KTIM San Rafael, and chosen a career path in theatre arts. And all independently from any knowledge of my lineage.

It became clear that my father was proud of his father’s writing. He shared Complemento with me and we took turns reading it aloud together. My interest in translation was sparked by the heightened language my grandfather used, which exceeded my vocabulary. In truth, it still does. To grasp the full nuance of his poetic style, I frequently turn to my Spanish-English dictionary. 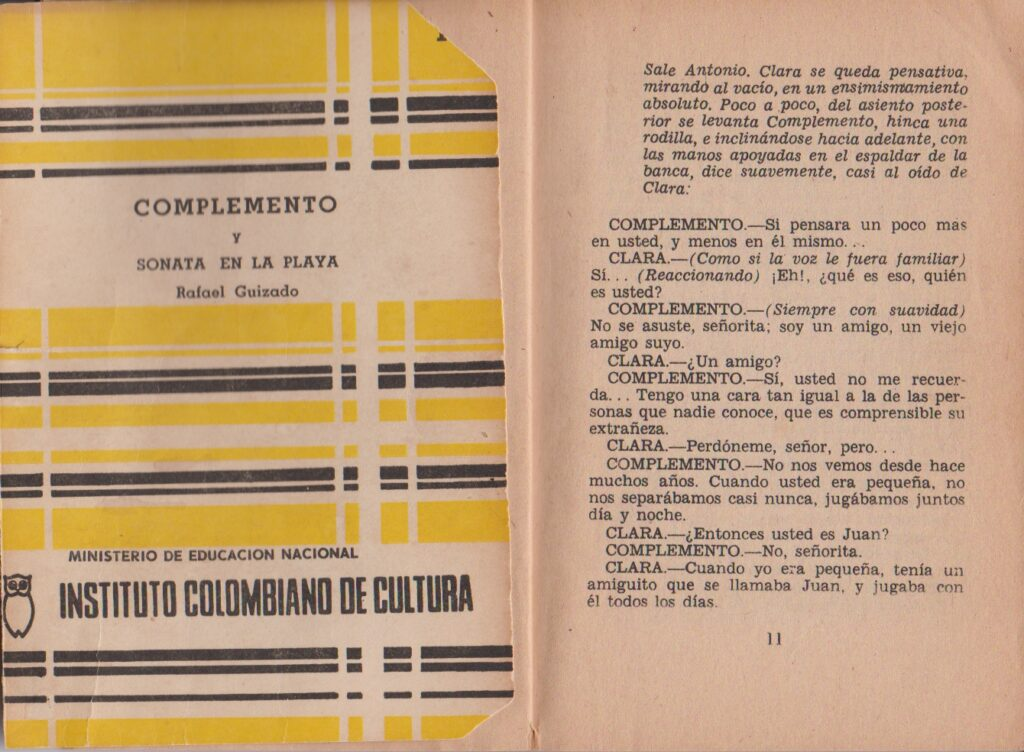 Fast forward a few decades, past a thwarted attempt to translate Complemento in college, and the journey continues in Las Vegas. With a renewed enthusiasm to translate it in earnest, I read the four-act play again and did some research. It unexpectedly revealed that Complemento is a classic masterpiece of Colombian radio drama. This hardly felt like the place to take my first stab at translation.

Not to be discouraged, I began researching and reading other, shorter plays from my grandfather’s bibliography. I found a number of titles by Rafael Guizado in the LILAS Benson Latin American Studies and Collections at University of Texas at Austin. I had them transferred to my local library. When I picked them up, I opened the cover of Cinco Veces Amor to find that the dedication read “A Lucy”, to my grandmother. It felt strange to have a personal treasure delivered via a public means. In any case, I was thankful and I delighted in reading the books. 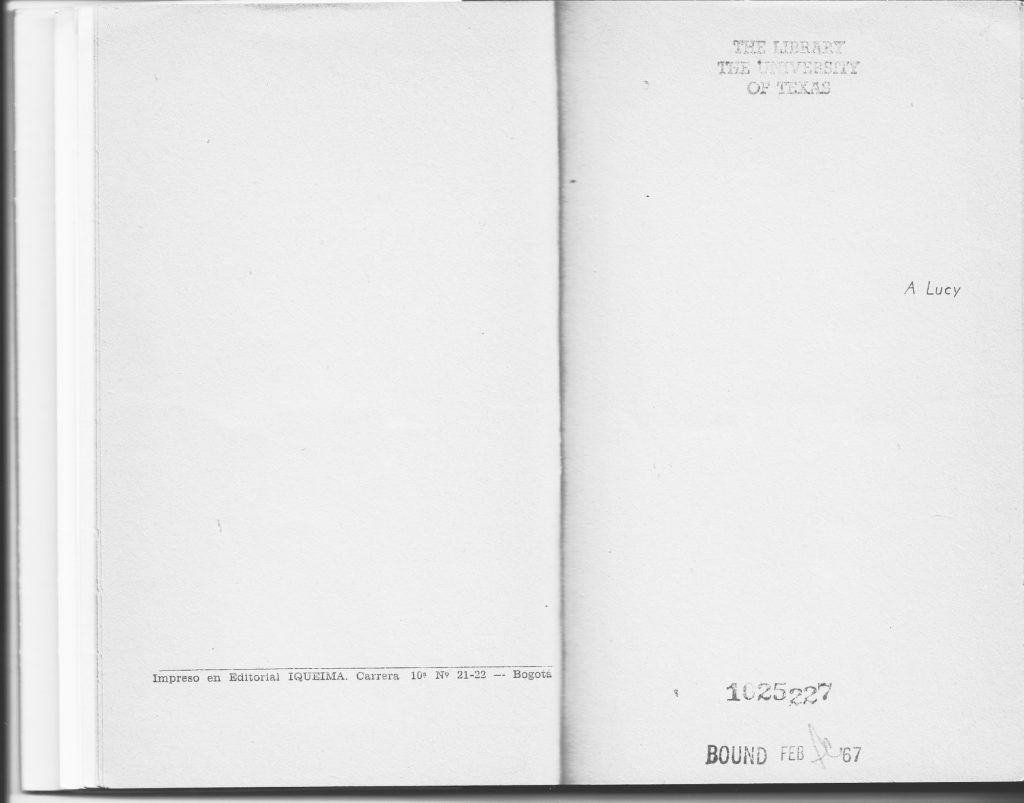 Cinco veces amor with the dedication, ‘A Lucy’

I found all of the stories fascinating, but the one that stood out for it’s timelessness and contemporary relevance was Scherzo (Dialogue with a Statue). Had I not known better, I’d have thought it was a new release by a contemporary playwright. I was also encouraged by it’s brevity. In less that 20 pages, the spirit of a late head of state, trapped inside his memorial statue, is forced by the Earth to come to terms with his legacy. So, I began with translating Scherzo.

Continuing to follow my curiosity about translation practices, I did an internet query that brought me to the Out of the Wings website. Impressed that there was a group of scholars on another continent doing similar work, I sent an email to their general inbox introducing myself and my project. “Hello from America!” it began. I expected it to go nowhere. To my surprise and good fortune, it started a dialogue with Out of the Wings founding director Catherine Boyle. “Dear Gigi, Many thanks for your email and for connecting with Out of the Wings,” she quickly replied, inviting me to share my translation of Scherzo in an Out of the Wings workshop reading! The feedback I received during that workshop was priceless, and propelled me forward into further development of the translation. 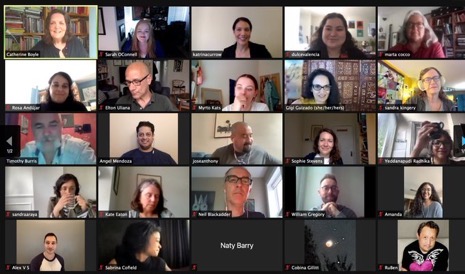 A Zoom session of Scherzo with Out of the Wings and The Asylum Theatre, 2021

I also continued researching, collecting, reading, and translating the scripts written and recorded for Colombia’s first national radio station by a grandfather I had never known. Doing so captured my imagination as a theatre artist, and helped me continue filling in the gaps of my family history. Over time, I saw themes emerge in my grandfather’s work: love, loss, family, career, music. Inspired by vintage newspaper articles describing his avant garde approach to theatre, I adapted four individual one-acts by Rafael Guizado into a full length stage play, Symphony for Six Actors. Scherzo is included as the penultimate movement of that “literary symphony”. So, the journey continued as my adaptation received further development in the rehearsal room at King’s College London and onstage at London’s Cervantes Theatre in Out of the Wings Festival 2017.

During the pandemic shutdown of 2020, I had time to put renewed effort into seeking publication and productions of my translations. I contacted editors, met with local producers, and revisited conversations with Catherine about developing an Out of the Wings collaboration between Las Vegas and London. During this dialogue, Catherine mentioned that current events had her thinking about Scherzo once again, and she suggested that would be a great place to start collaborating across the pond. In short order, Las Vegas producers Ralph Stalter, Jr., Irma Varela, and Sarah O’Connell laid the groundwork for a production of Scherzo, by The Asylum Theatre which specializes in new play development. This would provide the perfect opportunity to further refine the translation!

On the set of Scherzo, produced by The Asylum Theatre, 2021

To support that effort and kick off the collaboration, Out of the Wings hosted a second table reading of Scherzo, this time with actors from Las Vegas, and a larger collective of international translators offering feedback. The incredibly rich and enthusiastic discussion which followed informed the Las Vegas production. To bring the project full circle, the final performance included a post-show discussion where the Las Vegas audience engaged in dialogue about the play with Catherine who attended remotely (video below)

My journey with Scherzo continues with a published excerpt forthcoming from Asymptote Journal, and an Asylum Theatre production of Symphony for Six Actors at the Winchester Dondero Cultural Center.

Click on the link below to watch in full the Las Vegas performance of Scherzo.  Click here for the full programme to see details of all the cast and creatives.

Out of the Wings always welcomes new members, especially translators embarking on journeys of discovery like these.  Find out more about how we work at our FAQs, or contact us like Gigi did on info@outofthewings.org.  We can’t wait to meet you!