OOTW IN FOCUS: BLACK PLAYWRIGHTS OF THE SPANISH- AND PORTUGUESE-SPEAKING WORLDS 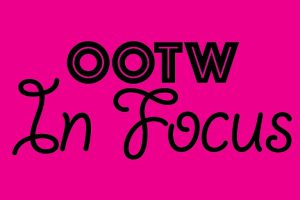 Out of the Wings Winter Warmers, a week long digital celebration of theatre in translation.

Out of the Wings brings together practitioners, researchers, writers and translators for an afternoon of discussion and exploration of the work of Black playwrights in the Spanish- and Portuguese-speaking worlds, their translation into English, and the companies, artists and educators foregrounding their work. (Scroll down to see full bios of our speakers) 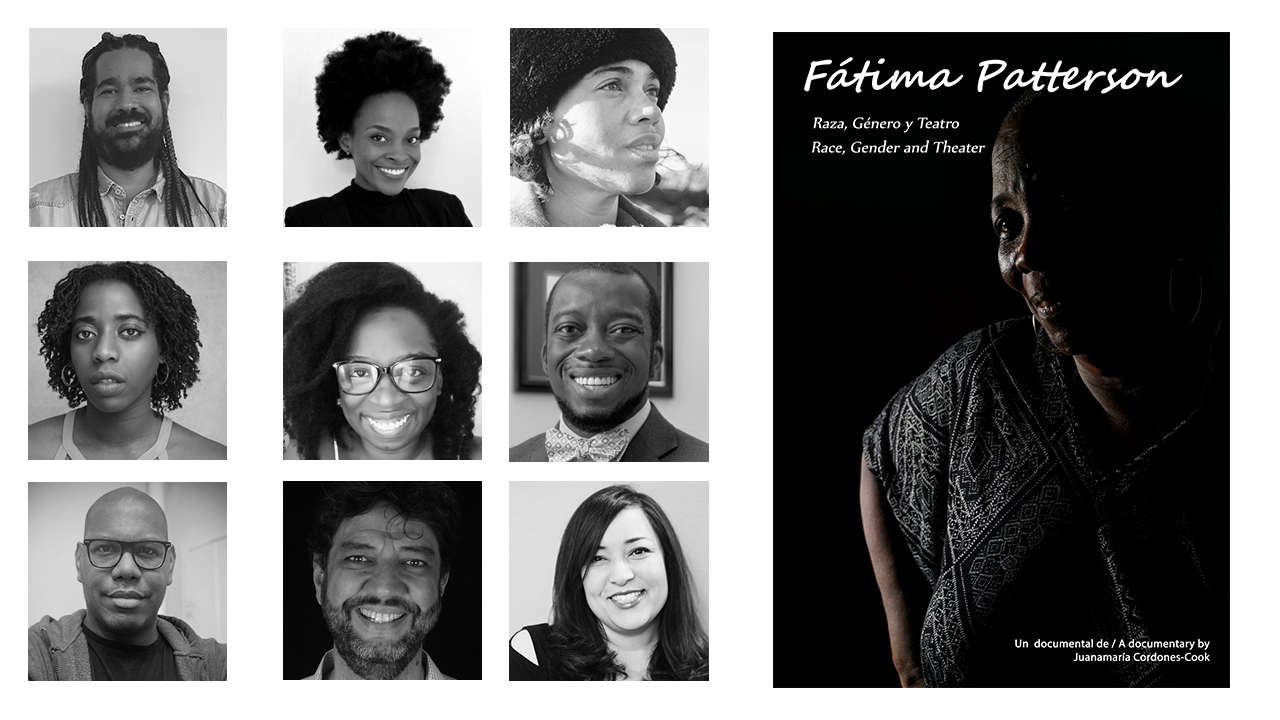 Fátima Patterson, Race, Gender and Theater (Cuba 2019), with English subtitles. Direction and production by Juanamaría Cordones-Cook. Presentation of the personal and artistic journey of Fátima de la Caridad Patterson Patterson (Santiago de Cuba 1951), storyteller, actress, theater director, and playwright, who has been distinguished with the Premio Nacional de Teatro 2017, the highest theater award in Cuba. Founder of the Macubá theater group in Santiago de Cuba, Patterson’s popular theater combats disremembering. She addresses issues of race, gender, and popular religion, through theater and oral history, a genre she masterly practices and incorporates in her artistic work. In a combination of performances, rhythms, and dances, this documentary presents the origin and development of this charismatic artist who with a strong sense of belonging brings to her creations her personal experience intertwined with traditions and components of her ancestral African heritage. The film is enriched by comments of leading Cuban intellectuals, Alberto Lescay Merencio, Enrique Bonne, Vivian Martínez Tabares, Georgina Herrera, Orlando Vergés, and Marino Wilson Jay, complemented by images of Santiago de Cuba with music by José Aquiles Virelles Rodríguez and the Conga de los Hoyos.

This event will take place via Zoom. All ticket holders will receive a Zoom invitation to the email address they book with one day prior to the event. Places are limited so snap up a spot while you can!

About our guest speakers

Dr. Almiro Andrade is an actor, director, playwright, dramaturg and theatre translator with a PhD in Translation of Brazilian Contemporary Drama through devising for performance at King’s College London. His approach sees all stages of theatre-making as an act of translation and his practice champions the production of international pieces in the UK since 2008. His current works include: the first English translation of Namibia, Não! by Aldri Anunciação; a gender-bending adaptation of The Blind One and The Mad One by Cláudia Barral produced by Foreign Affairs Theatre; and recently published three new translations of the Brazilian canonic playwright within Nelson Rodrigues – Selected Plays, by Oberon Books.

Layla Benitez-James is an editor and translator based in Alicante whose poems are forthcoming in Virginia Quarterly Review, Bennington Review, and the Latino Book Review. Poems and translations have appeared in Poetry London, The London Magazine, Hinchas de Poesia, The Acentos Review, Guernica, Waxwing, Revista Kokoro, La Galla Ciencia, and elsewhere. Audio essays about translation can be found at Asymptote Journal Podcast and print essays have been published in Tenderly Mag and Europe Now Journal. God Suspected My Heart Was a Geode but He Had to Make Sure was selected by Major Jackson for the 2017 Cave Canem Toi Derricotte & Cornelius Eady Chapbook Prize and published by Jai-Alai Books in Miami.

Dr. Jeffrey K. Coleman is an Associate Professor of Spanish at Marquette University where he specializes in Contemporary Peninsular Spanish and Catalan theatre and popular culture. He has published several articles on immigration, race, and national identity in Spanish theatre and popular culture in Catalan Review, Symposium, Estreno and others. His first book, entitled The Necropolitical Theater: Race and Immigration on the Contemporary Spanish Stage (Northwestern University Press, 2020), explores how the intersections of race and immigration manifest in Spanish theatre from 1991-2016. He is also working on his next book project tentatively titled, España Negra: The Consumption & Rejection of Blackness in Contemporary Spain, which explores the ways in which Spanish media, popular culture, and literature have portrayed Blackness from the early 20th century to the present. Website

Dr. Juanamaría Cordones-Cook is the University of Missouri Curators’ Distinguished Research Professor and the Catherine Paine Middlebush Professor of Romance Languages. She has done pioneer research on contemporary Spanish American literature, theater, and visual arts with concentration on Afro-Hispanic intellectuals and artists. With an extensive record of published journal articles and award-winning books and films, Cordones-Cook has been able to give image, sound, and movement to her research through the production and direction of audiovisuals: oral histories and documentaries. An Emmy nominated filmmaker, Cordones-Cook is building a panoramic audiovisual compendium and memory of Havana’s Black Renaissance with over twenty-five documentaries on artists and writers of the African Diaspora with emphasis on Cuba.

Dr. Eunice S. Ferreira, Associate Professor of Theater, Skidmore College (New York), is a scholar artist whose research focuses on the intersections of theatrical performance and issues of language, race, class, gender, culture and national identity with a special focus on Cabo Verde, West Africa. She has produced, directed, and choreographed a variety of play and musicals, including the multilingual premiere of The Orphan Sea by Caridad Svich. She has published in U.S. based and international journals and is the Vice-President for the Black Theatre Association. Her first book, Crioulo Performance: Remapping Creole and Mixed Race Theatre, will be published by Vanderbilt Press. Her co-translation of Alone Onstage by Mário Lúcio Sousa is the first English-language publication of a play from the Cape Verde Islands. She is the daughter of Cape Verdean immigrants and is forever grateful to all those who came before her. Website

Xinha Morais is an Angolan, Portuguese born and East London bred writer performer. She writes both for theatre and for screen, her writing is highly inspired by Angolan history and mythology as well as personal experience of being a black woman. Her first play Firecracker was an exploration of the relationship between Angola and Brazil through capoeira. Her most recent work is a mockumentary comedy web series about 4c hair on YouTube.

Eddy Janeth Mosquera Hinestroza is a theatre educator and playwright. From 2012 to 2016 she taught in the Dramatic Arts BA course at the Universidad del Valle, Buenaventura. She has been writing plays since 2011, when she penned a piece on abortion, Por mi Puta Madre, followed in 2013 by La Gata, a story about a woman and the Catholic Church which was written for the Long Distance Affair collaboration organized by PopUP Theatrics in New York. In 2015 she wrote Iceberg, a text about gender violence, and in 2016 Esquizoide which explores the end of conventional relationships for couples. More recently, she has written Trastornos (2017), another play on abortion, and Las mujeres de Sara, which addresses the racialization of sexuality and racism. An extensive analysis of the latter was featured in the 2019 book Autores afrocolombianos. Dramaturgia para la liberación y la escena, written by the Cali dramaturg Rodrigo Vélez. In 2020 she founded Gimnasio para Escritores, an online e-learning course aimed at writers of fiction.

Johanna Robledo (MA in Scenic Creation and Direction; BA in Dramatic Arts, Universidad del Valle) is a theatre actor, director and educator. She is a member of the research group Laboratorio Escénico Univalle through which she has participated in important national and international festivals such as FITB (Festival Iberoamericano de Teatro de Bogotá), ATEC 7th International Forum with the 2nd Asian Theatre Schools Festival (Beijing, China), and Festival De Teatro Clásico De Almagro Y Festival Fringe (Madrid, Spain). She belongs to the artistic laboratory Sietesorongos, which won an award with Pinocho está en el Congo, a play that reflects on the importance of collective memory and children’s participation in the armed conflict. Since 2016 she teaches in the BA Dramatic Arts course at the Universidad del Valle, where she has directed various productions such as Dostoevsky’s The Crocodile. She is director and founder of the artistic laboratory Turín Teatro, which staged Mina: un Woyzeck con acento de Buenaventura, a work which formed part of her MA thesis and which received a laureate distinction. In 2020 she staged Queloide by Juan Camilo Mutis, a project which won the first departmental call for the development of new cultural public by the Gobernación del Valle del Cauca; this was a collaboration between Turín Teatro and the theatre collective Cuaderno de Notas. Queloide was also selected for the ENCUENTRO VIRTUAL DE MUJERES AFRO EN ESCENA (Perú 2020). Finally, she serves as a role model in the workshops El Derecho al Derecho led by Masterpeace Cali.

Ramiro Silveira is a Brazilian director, researcher, lecturer and actor trainer. He is known for his innovative theatre process (subject of his PhD thesis) called Theatre Playground, a study of presence and relation based on rhythm, movement, and multicultural references to inspire creative connections. Since 2001 he has been using his technique to direct theatre and run acting and directing workshops in many different countries. Working professionally as theatre director since 1995, Ramiro has directed more than 30 plays in Brazil and abroad and has received several awards, including the Volkswagen Theatre Award and the Brazilian International Press Award UK for his achievements as an international theatre director. In 2018 he was the organiser and project curator of the book Nelson Rodrigues Selected Plays, published by Oberon Books. Since 2015 Ramiro is the head of the BA World Performance course at East15 – University at Essex in UK.

Manuel Francisco Viveros is a theatre actor, director, educator, and researcher. He starred in several plays on the Colombian stage, including Chekhov’s Uncle Vanya, and Shakespeare’s Othello. He was the general monitor of ‘Young Creators from the Coast’ project from 2004 to 2009, in which he premiered Con Carne y sin Pescado, an adaptation of Derek Walcott’s Beef, No Chicken for the XIV Colombian Pacific Book Fair, and later Roald Dahl’s The Twits. He directed Ibsen’s An Enemy of the People via a grant for Mixed Fund for the promotion of Culture and Tourism, Governor’s Office of Valle del Cauca, COLOMBIA 2008. He directed the Interschool Theater Festivals in 2009, 2010, 2011, and 2012 in Buenaventura, Colombia. From 2011 to 2016 he was the head of the Dramatic Arts BA course at the Universidad del Valle, Pacific branch in Buenaventura. He is a Fellow of Manos Visibles, and holds an MA in Government and an MFA in Theatre Performance. He has 4 times been a guest of the National Theater conference of the Theater Communications Group (USA). From 2017-2019 he was a Fellow of the Laboratory for Global Performance and Politics at Georgetown University. He is currently pursuing his PhD in Spanish at New York University.