Out of the Wings was co-founded in 2008 by Catherine Boyle, David Johnston and Jonathan Thacker, following their collaboration with Royal Shakespeare Company’s acclaimed Spanish Golden Age season. The first years of the Out of the Wings project resulted in new translations, readings and performances, a wealth of research, conference and public events.

It also resulted in an innovative searchable database of English translations of plays from throughout the Spanish-speaking world, still available at the project website outofthewings.org

In 2013, Out of the Wings was relaunched as a monthly meeting where translators and other theatre practitioners and researchers of all kinds meet to read a new English translation of a play. These sessions are free to attend and anyone with an interest in theatre and international collaboration is welcome.

Since 2016 we have hosted an annual festival of play readings, workshops and discussions, showcasing plays in translation from throughout the Spanish- and Portuguese-speaking worlds, ranging from 90-year-old classics to the best of contemporary writing. Over four years, our festivals have showcased new translations of 21 plays from 9 countries.

Our festivals, along with our year-round activities of monthly table reads, discussions and one-off theatre events, have led to outcomes that we are proud to celebrate. 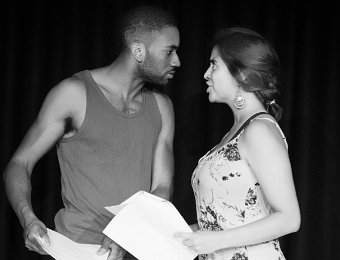 The first play to feature at our first Festival in 2016, The Blind One and the Mad One by Claudia Barral, translated by Almiro Andrade, was later picked up by the Hackney-based company Foreign Affairs for full production in their 2019 season. In 2020 the Foreign Affairs production opened the John Thaw Initiative Latin American Season at the Actor’s Centre.

Our 2016 festival also featured The Sickness of Stone by Blanca Doménech, translated by William Gregory. In 2019 the play featured at the Columbia International Play Reading festival in New York, curated by David Henry Hwang and directed by Nana Dakin.

Out of the Wings 2017 was the first of two of our festivals staged at the Cervantes Theatre, London. It premiered William Gregory’s translation of Cuzco by Víctor Sánchez Rodríguez, and introduced the play to director Kate O’Connor. Kate went on to co-produce and direct a full production of the play at Theatre503 in 2019. Both Cuzco and The Sickness of Stone feature in the Valle-Inclán award-nominated Oberon Anthology of Contemporary Spanish Plays.

In 2017 two of the plays featured at our festivals were selected for the CASA festival of Latin American theatre. At the Arcola Theatre, Mary Ann Vargas directed her translation of Mariana de Althaus’s Noise; at the Southwark Playhouse later that season, Camila Ymay González directed Dancing Alone Every Night by Raquel Diana, translated by Sophie Stevens.

Our 2018 festival included a collaboration between translator Sarah Maitland and playwright Almudena Ramírez-Pantanella on the play Masters of the Universe. The following summer, both Almudena and Sarah were selected to participate together in the Royal Court Theatre’s International Summer Residency.

Out of the Wings translators collectively translated six plays for the 2019 Oberon Anthology of Contemporary Argentinian Plays, edited by Out of the Wings director Catherine Boyle.

In 2019 our Festival moved to the Omnibus Theatre. First showcased at that festival, Kate Eaton’s translation of Abilio Estévez’s Freddie, directed by Camila Ymay González, reopened in 2020 at the John Thaw Initiative Latin American Season at the Actor’s Centre.

Developed at our monthly table-read meetings, Catherine Boyle’s translation of The Bonds of Interest by Jacinto Benavente was produced by Odyssey Theatre, Ottawa, in summer 2019.

Out of the Wings translators Almiro Andrade and Susannah Finzi translated five of the plays included in the 2019 Oberon Books publication of Nelson Rodrigues – Selected Plays.

The 2019 Out of the Wings festival was a finalist in the 2019 Focus Brazil Awards for its promotion of Brazilian culture in the United Kingdom.