Every month, Out of the Wings invites a translator to share their work in our free-to-attend laboratory.  We gather to read a play in translation, discuss it, and offer feedback.  All are welcome.  In this blog, translator Gigi Guizado tells us about her experience of sharing her work with us, how she found us, and what came next.  And OOTW director Catherine Boyle reflects on being beamed across the world – and magnified! 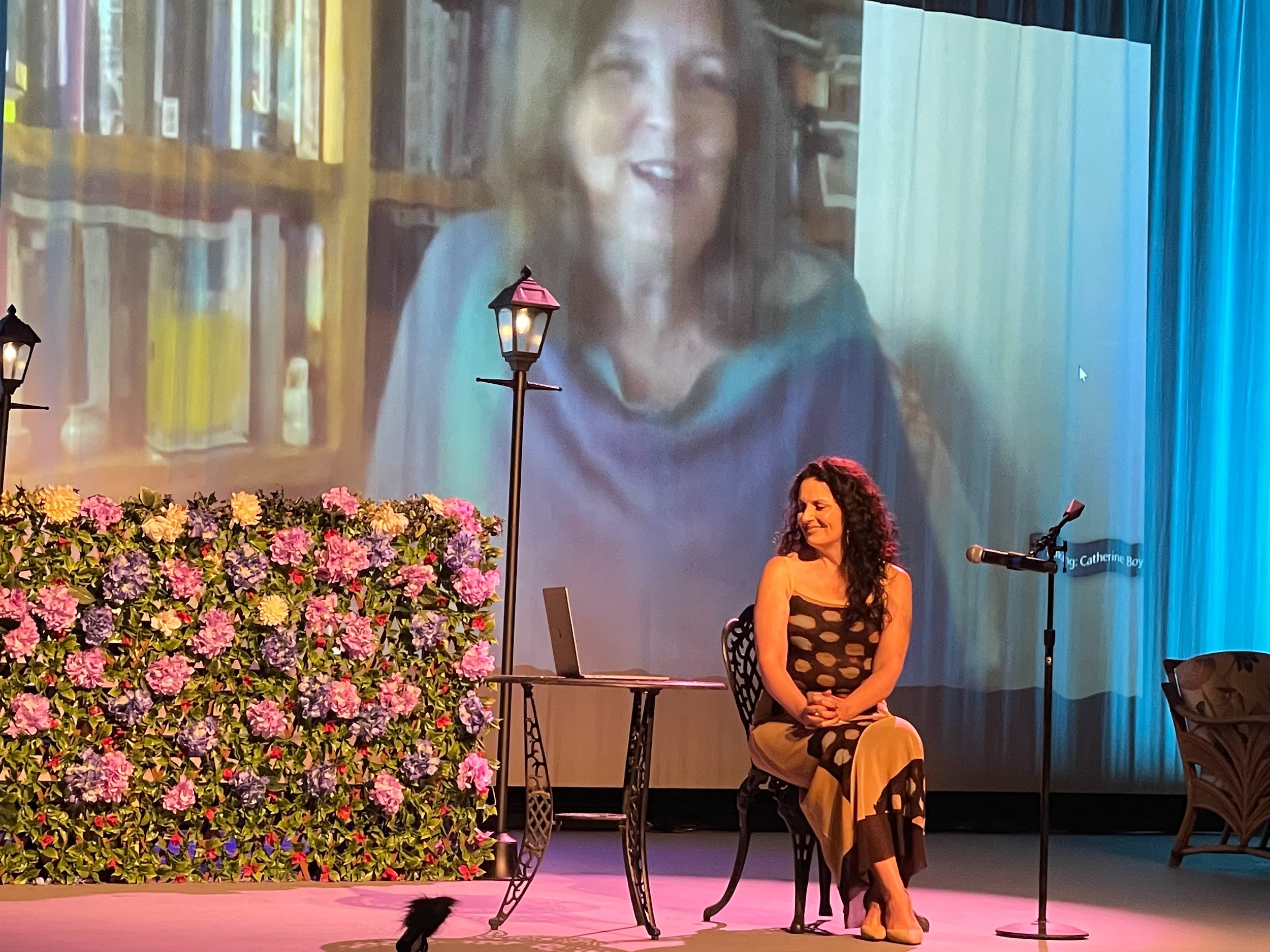 This magically absurd photo of Catherine Boyle (background) and Gigi Guizado (foreground) is not unlike the next photo.

GIGI: What is the story behind these pictures and what do they have in common? The throughline is an improbable friendship formed between a novice theatre translator in Las Vegas and an expert in London, through the monthly meetings of Out of the Wings. 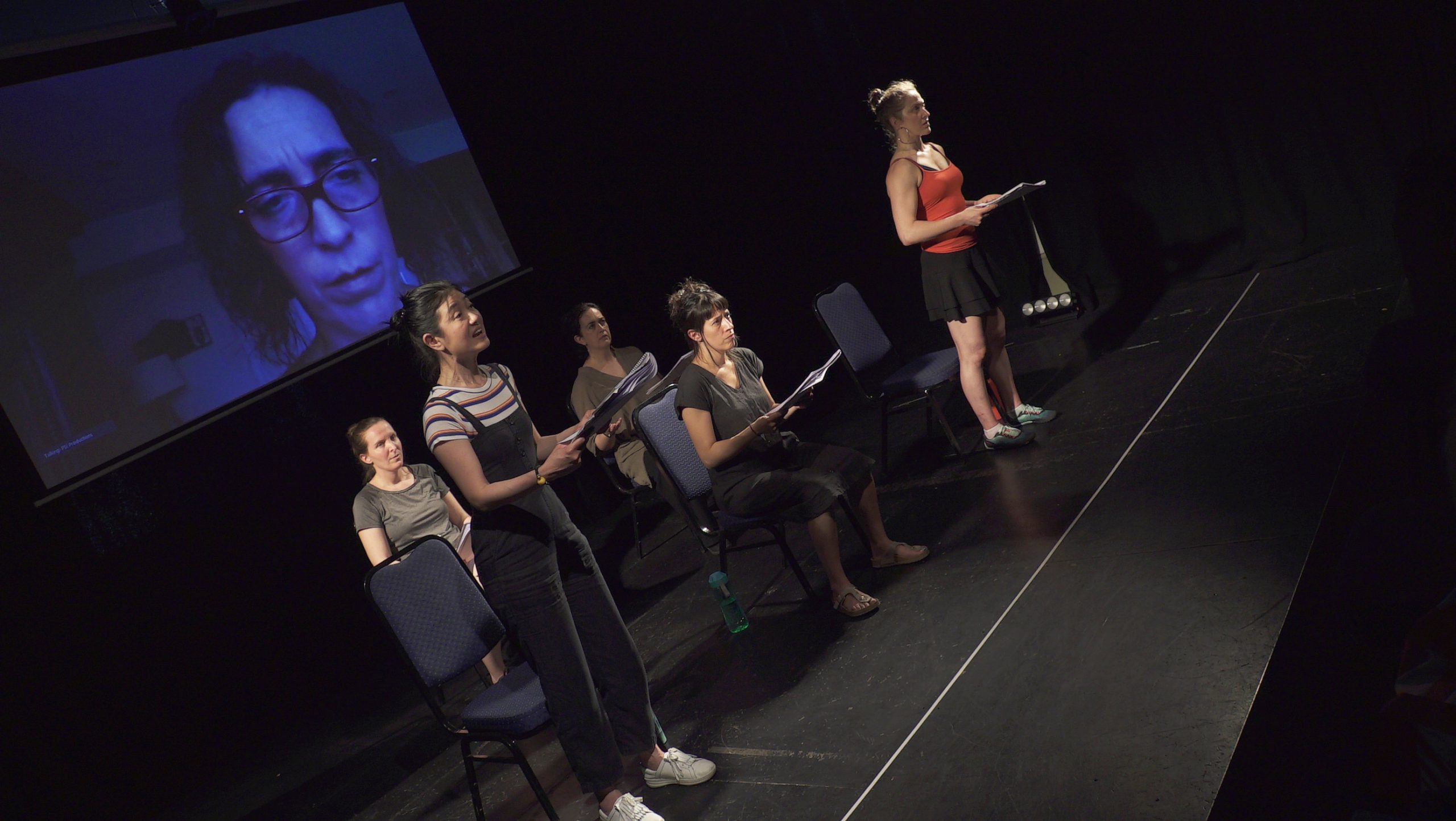 In 2015, as I set out on my journey to translate my grandfather Rafael Guizado’s literary and theatrical works, I had many questions. As one does in this digital age, I sought most of my answers online.  One question led to another: Has anyone translated Complemento?  Has anyone translated any of Rafael Guizado’s body of work?  Have any Colombian plays been translated at all?  This last query yielded some information, leading me to Out of the Wings (OOTW), a free online comprehensive database of plays written in Spanish in different periods and countries, information about their authors, sample translations into English, synopses, performance histories and many other tools for interpreting the featured dramas.

Surprised and excited to find a group of scholars in the UK doing the same type of work that I was embarking on in solitude, I found their contact information and sent an email of introduction. Beyond my wildest expectation, Catherine Boyle replied and soon invited me to participate in an Out of the Wings monthly table reading remotely via Skype! The play, discussion, and cultural exchange were fascinating and fulfilling. Before long, Catherine invited me to have a table reading of my own translation, Scherzo (Dialogue with a Statue) by Rafael Guizado.  The feedback and encouragement I received during that online meeting was invaluable, and led to further development of the translation in the OOTW 2017 Festival of Staged Readings, publication in Asymptote Journal, and a production in Las Vegas by The Asylum Theatre.

Meanwhile in Las Vegas, on the eve of Donald Trump’s presidential inauguration, I attended The Ghostlight Project at Las Vegas Little Theatre: a symbolic gathering aimed at activating a network of people across the US working to support vulnerable communities. This is where I introduced myself to Sarah O’Connell, Artistic Director of The Asylum Theatre and founder of Eat More Art Vegas. I asked if there was a course in theatre translation at University of Las Vegas Theatre Department where she is an adjunct faculty.  Although the answer was “no,” a connection was made and a seed was planted. Sarah watched and encouraged me as my work with Catherine and Out of the Wings grew and flourished. So did her colleague Ralph Stalter, Jr. who I met through Eat More Art Vegas, a guide to the Las Vegas local Theatre and Arts scene. Ralph had reviewed my first performance in Las Vegas (as Elizabeth in The Christians by Lucas Hnath) and subsequently interviewed me for EMAV 10 Bites. As a result, he read my translation of Complemento and took an interest in producing it.

In the spring of 2019, Out of the Wings held a table reading of my translation of Complemento by Rafael Guizado, and that summer Act I of Complemento was featured in OOTW 2019 Festival of Staged Readings.  When I returned home to the US, I pondered what my next steps with Complemento should be. I also completed a new translation: La Terapeuta/The Therapist by Gabriela Yepes. Though pursuing a production and publication for Complemento were new experiences for me, and a bit intimidating, I knew exactly what to do with The Therapist. I submitted it for the OOTW 2020 Festival of Staged Readings and it was accepted!

Then the pandemic swept around the globe, and the festival was postponed.  Soon absolutely everything was postponed.  This break in activity offered an opportunity to focus on a long term goal that had been falling through the cracks of my usual hectic daily routine. I reached out to Ralph and we met via Zoom to revisit our discussion about producing Complemento. He brought Sarah into the conversation and eventually we proposed a collaboration with Catherine and Out of the Wings.  A Las Vegas production by The Asylum Theatre at the Winchester Dondero Cultural Center, with two live performances recorded and streamed online, and a post show discussion with Catherine participating remotely is the format we have settled on.

Scherzo (Dialogue with a Statue) was our first production in June of 2021 (watch in full here, via Facebook).  And Complemento by Rafael Guizado, our current second production, is where the magical, absurd photo above comes from.

Catherine Boyle on being the picture!

CATHERINE: It was midnight or thereabouts in London and I was joining the after talk back after a performance of Gigi’s translation of Complemento. I had done this before, for the reading of Scherzo, and had a sense of the possibility of being a giant, late-night face behind Gigi and looming big-sister-like over the stage and the audience.

The image sums up to me our relationship with Gigi, one forged through the email Gigi sent out into the ether, her attendance by Skype at our improvised hybrid Out of the Wings tables reads, her annual attendance at our Out of the Wings Festival in south London, in our ‘barricada cultural’, as our dear friend and collaborator, Cuban dramatist Abilio Estévez called our space at the Omnibus Theatre. It’s a relationship that has always epitomised distance and closeness at the same time, real connection and friendship that has grown over the years.

It’s an image that also speaks to me of our experience over the last few years, the pandemic years. The years when we had to become more proficient – dare I say professional – about being online, creating our community online, using our initial protocol to develop a space that would be welcoming, creative and open. And so we learned the language and then we learned again as we moved out of Covid and started doing hybrid meetings, adjusting anew to the demands of place and space, to languages of the ‘real’ and the ‘virtual’. Which is which now?

Which is what I ask myself when I look at that image. I told my family that I was off to my office to do a Q&A in Las Vegas. But they’re used to that type of statement now – we’d been all over the world online and the instantaneous travel across continents had also become part of our lexicon. As we have looked to discover what we learned from and got out of the experience of a global experience, that potential to drop into other places, speak to other people, find wonderful connections all persist and persist in constant wonder for me – how else could I be speaking to an audience in Las Vegas about what we have been building with Out of the Wings and our myriad connections. (Well, perhaps a real visit might be one way.)

Above all, the image makes me laugh out loud (not as loud as my family, though). There is sheer joy in it, the joy of the many wonderful connections that the work of translation has brought me, as part of a community of people who carry ideas and thinking and possibilities from one place to another.

Our next meet-and-read will be on 16 December 2022 at 15:00 GMT (with an online option always available), to read Alexander Aguayo’s translation of El mito de la gravedad/The Myth of Gravity by Panamanian playwright Javier Stanziola. (This will be our first-ever read of a play from Panama, following our first-ever play from Honduras two months ago.) To attend this or any of our monthly sessions as a guest or participant, sign up to our mailing list.