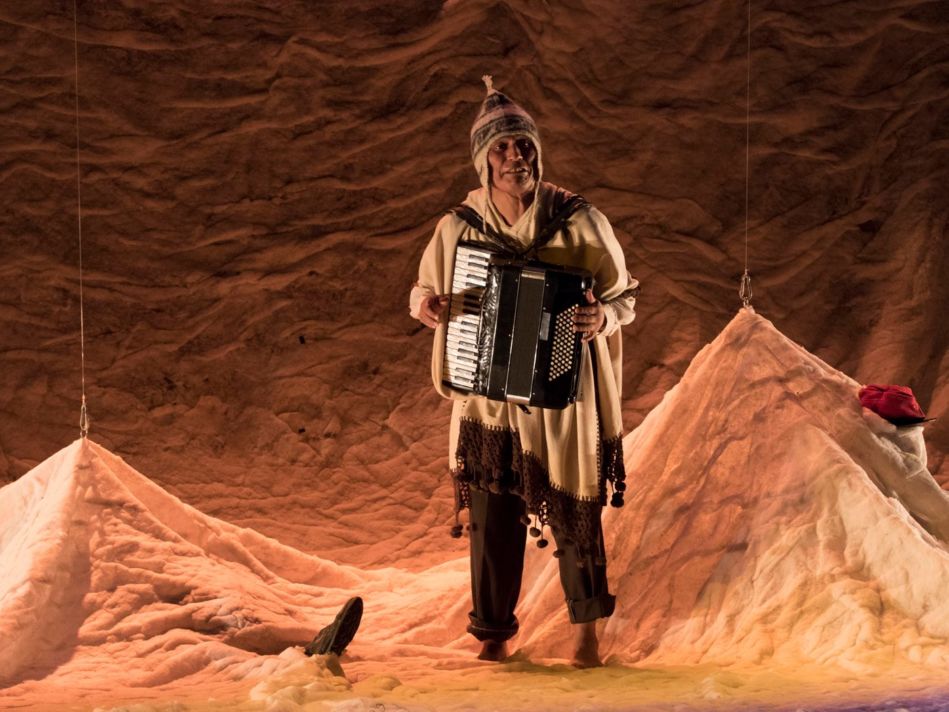 Every month, Out of the Wings invites a translator to share their work in our free-to-attend laboratory.  We gather to read a play in translation, discuss it, and offer feedback.  All are welcome.  For our April 2021 session, we were joined by translator Naty Barry and her translation of Mar/Sea by Argentinian playwright Arístides Vargas.  In this blog, Naty tells us about her experience translating the play and sharing it with us.

When I first saw Teatro de los Andes [Facebook page] perform, I was a 20-year old, flaming-red-haired passionate drama student who couldn’t believe her eyes. I was watching their play Graffiti at Teatro Adán Buenos Aires, under a bustling freeway in a downtown district in the city where I was born, and I felt that something of what was going on onto that stage was of a nature I had never seen before. It was pure poetry, powerful and gentle at the same time, collective, cooperative, and also individual and unique. And I promised myself I would get to that company no matter how long it took me. How much strength does the will of our passion hold?

Five years later, I volunteered at the Teatro de los Andes 10-year-old festival, and got to see Teatro Malayerba and meet their members personally. I saw Nuestra Señora de las nubes, cried my eyes out, and got to share a lunch with the company (and try to make myself seen among some other ten fascinated young actors-to-be). I remember Arístides Vargas and Charo López’s warmth and sweet kindness as they encouraged us to work hard and follow our dreams. How many lunches does the need for warmth and encouragement long for?

Some ten years later, I managed to honour those words of motivation, and got to stay for almost two years at Teatro de los Andes as guest artist. I had already trained in their method in many occasions both in my home town as in their residencies, and was continuously studying, researching and writing about their ethics and aesthetics. It was the most intense period in my humble theatre career, touring, travelling, almost having no fixed location. And after some years of it, I decided to take a break. How many exotic and hectic travels does the dream of a quiet life require?

The break consisted on going back home, finishing my twice abandoned literary studies, and perhaps graduate as a translator. I would say farewell to the stressful way of life of the theatre and settle down a bit. However, I did not foresee there was a junction between these two paths.

As my translation studies evolved, so did my interest in translating the arts. Besides, people who knew me from “my previous life” began to commission translations of their artistic projects. I got to translate artists’ portfolios, presentations, artist statements, film scripts, catalogues, technical forms, reviews, etc. In 2014, still some years away from the majors that would define my postgraduate specialisation, I got the most challenging commission I had ever imagined: Teatro de los Andes needed a play translated into English for an international festival. It was Mar.

At first, I was terrified. I thought of saying no. And later ―perhaps a little of that warm voice of Arístides’ and Charo’s was still tickling inside me― I decided to trust more on the theatre-maker in me rather than on the translator who was still in the making. The group was very pleased with the result, the reviews and feedback were positive (of the translation, too!) and the goal of selling the play to international curators was achieved. I was thrilled.

How many turns of the cycle of life need be bent before the dream of dreams comes true?

I finished my translation grad-school and many times in the years that followed, specialising in literary translation, the experience came back to me often. I read of authors who conceptualised many of the ideas that had gone through my mind at that time: how translation becomes so much more than a “bridge”, how the role of the translator intertwines with the artists’ aims and missions, how those voices, those Latin American voices in transcultural tension, needed so much more than sounding “natural” or “fluent” in English translation. And by “so much more” I mean so many processes that I had to select very carefully, for instance, what is a valid transfer of the snobbish way of talking in Bolivia when said and heard in English?, what should I do about the naming of Bolivian foods and ways of clothing that immediately evoke thousands of layers of meaning in some audience’s mind and none in some others?, what to do with rhymes and chants of a traditional background that is non-existent in the target culture?

I met Catherine and through her, the OOTW Collective, in 2019. It was thanks to the school where I trained as translator in Buenos Aires, Lenguas Vivas “Juan Ramón Fernández”, and the Argentine Translator’s Association AATI. We spent ten days immersed in the experience of translating theatre non-stop, working with actors and playwrights, debating, enjoying, exchanging. I felt the thrill ―again― of sharing my passion, my road-junction version of my passion. And later, to meet a bunch of people overseas who had the same debates. There, I once heard Catherine speak about “Englishes” and immediately knew this was the name for something I had pursued in the translation of Mar. How many languages which are not my own can come in when I try to find words for characters who speak in another language other than my own, in languages other than their own?

Translating Mar was appropriating its questions, its poetry and statements, its ambiguity, its tensions, its absurdity and extreme coherence. It was a most challenging and rewarding experience. It was almost reciprocal in giving back so much these two companies had given to me in my life, as to so many Latin American artists. It was expanding the horizons of the reaches of our local history in a narrative of our own.

To have the opportunity to hear those words read out loud by actors overseas was an act of magic, one of those acts that come true in theatre life and put on hold for an hour or so the horrors of actual wars and the sadness of pandemics and the meanness of poverty and the shrieks of injustice. It was 2021, and being in that Zoom room with actors Alice Guimaraes and Freddy Chipana from Bolivia, professor Catherine Boyle and the members of the OOTW collective from the UK and the US, my thesis tutor and Theatre Translation professor, María Inés Castagnino, my former teacher and now partner in our translation project, Gabriel Torem from Argentina, and to hear those words read out loud in English, was an agglutinating experience in my life, agglutinating like the morphemes in the Quechua language, so unique in formation and sound, a time machine somehow closing a circle that made complete sense to me. In total happiness and gratitude, to art, to life…

And to that tiny little baby life growing inside me. Another journey in itself. Almost a year has passed from that reading. As I write these words now, my six-month-old daughter sleeps quietly her most innocent baby sleep. How many dreams in her so many sleeps will she hold in her life? How many wars will she witness? How many more pandemics? How many journeys of life, of a life of discovery, of magic and wonders, like the ones you only find in the theatre, in translation, in collective activity and in gathering with the people who share your passion?

Thank you enormously and forever Catherine, William, Arístides, Alice, Freddy, María Inés, Gabriel, Teatro de los Andes, OOTW Collective, it is impossible to name you all, I don’t even know everyone’s names, I just want to be grateful and stay alert and open to the wonderful journeys of life.

Our next meet-and-read will be on 29 April 2022 at 15:00 BST (with an online option always available), to read Sarah S. Greenwood’s translation of A porta fechou-se e a casa era pequena/The door closed and the house was small by Portuguese playwright Ricardo Neves-Neves. To attend this or any of our monthly sessions as a guest or participant, sign up to our mailing list.